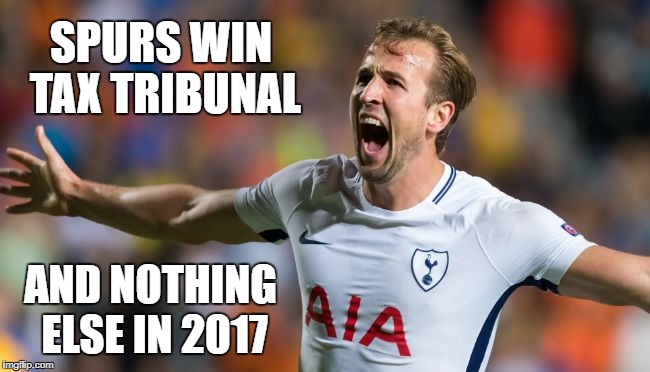 This Blog concerns the long running case of HMRC v Tottenham Hotspur Football Club. The case concerns the tax treatment of payments to players for their contacts being terminated early, the most notable example being former England international Peter Crouch.

On transfer deadline day, August 2011, Peter Crouch and Wilson Palacios were told by Tottenham that they were surplus to requirements as the club sought to reduce its wage bill. Both players agreed to move to Stoke City and received lump sum payments for the early termination of their contracts, with Crouch striking a deal for £3m and Palacios receiving a total of £1.5m.

HMRC did not like this arrangement and informed Spurs that the payments should be classed as earnings and therefore subject to Income Tax and NI, but Tottenham claimed the money was compensation for ending the contracts early by mutual consent. Tottenham argued that their analysis of the PAYE rules was correct and that the entire payments should be free from National Insurance, plus the first £30,000 for each player should also be tax-free.

At the heart of the case was a relatively mundane but important technical point: because the payments were in effect for the footballers not doing their jobs, rather than for doing them, Tottenham argued that because of this the payments were not from employment.

HMRC issued tax assessments and Tottenham appealed them to the First Tier Tax Tribunal and won the case’ however HMRC took the case to the appeal.

HMRC had been trying to assert that because the contract envisaged the possibility of early termination for Crouch and Palacios, that was enough to mean that effectively the payment received was pursuant to the contract and therefore taxable as earnings from the employment, even though actually the contract didn’t specify that the employee will get a specific sum of money.

However the Appeal Tribunal disagreed and rejected HMRC’s appeal and upheld the First Tier Tax Tribunal’s decision that the payments should not be considered general earnings.

“If HMRC were right that any contractual provision allowing early consensual agreement for a termination is sufficient to make the termination payment made under the resulting agreement ‘from an employment’, that would cover almost every termination payment agreed in respect of a fixed term contract, because there is nearly always going to be an express or implied right to agree an early termination.

A payment in lieu of notice (PILON) is a payment made when an employment is terminated without giving the employee as much notice as they are entitled to under the terms of their contract.

After the decision was published, employment tax expert Chris Thomas, legal director at Pinsent Masons, commented that whilst the judgment is a “helpful clarification”, its significance may be short-lived.

“It’s a useful precedent in a fairly limited number of cases; If you’ve got employees on fixed-term contracts where that contract is terminated before originally envisaged, it’s going to be relevant.”

Mr Thomas was correct that the benefits may be short-lived as HMRC did not waste any time licking their wounds, but immediately took action to change the rules and persuaded the Treasury that amendments to the PAYE regulations were necessary.

Tax Rules with Trivial Benefits
Tax Changes 2021: What to expect
Tax on Foreign Earnings: Who declares you or your accountant?