Self Assessment Payment: HMRC will soon not accept Credit Cards 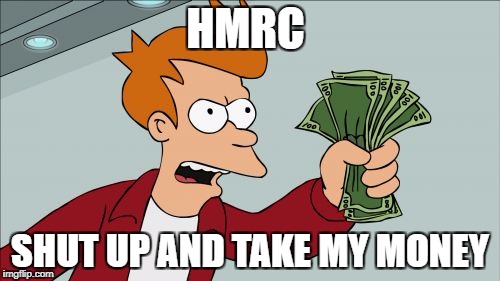 HMRC recently wrote to all accountants to suggest that we tell our clients that from 13th January 2018, it will no longer be possible for them to settle a self-assessment bill with a personal credit card.

The credit card ban is has come as a response to a government ban on credit and debit surcharges in the UK, which is itself a reaction to EU directive PSDII, which bans surcharges on Visa and Mastercard payments.

From 13th January both small businesses and individual traders will no longer be able to pass on charges to users for spending via a credit or debit card. This has resulted in those ‘nice’ people at the Tax Office to change the rules so that anyone trying to pay their self-assessment bill with a personal credit card after this date will have their payment refused.

Instead, they will have to use a business credit card, which many businesses do not have, or pay their Tax and NIC by bank transfer or debit card.

And HMRC have given a whole 8 weeks advance notice of this change, whoop-de-doo!

A Freedom of Information request from Telegraph money in 2016 revealed that HMRC charged taxpayers £50m to pay their taxes by credit card over the previous five years. The statistics also showed that almost 500,000 payments were made to HMRC by credit card in 2014-15 alone, which resulted in more than £12m in commission.

“It would be unfair to expect other taxpayers to pick up this cost,” continued the tax authority spokesperson. “There are a range of ways for people to pay us depending on the type of tax being paid, including debit cards, Direct Debit, Faster Payment and BACS.”

Serious concerns have been raised among the small business community that the measure could result in hard-pressed businesses being put under even further pressure. Paul Phipps, director of Curtis Recruitment, commented; “I accept that paying a tax bill by personal credit card is always a desperate, last resort, removing it as an option could prove seriously detrimental to small business and sole traders especially”.

Phipps went on to say: “It could mean the difference between survival and going bust. In an attempt to protect consumers against unfair credit card usage fees, the PSDII has indirectly removed an emergency payment facility that some struggling businesses rely upon and whichever way you look at it, this is not good for the UK”.

However, accountant Marion Hayes believes the ban will not have as big an impact as suggested.

“My cards all offer as part of the balance transfer deals the facility to put a lump sum into a bank account to pay for bills where they do not accept cards. You have to pay a transaction fee I understand, but unlike ordinary cash withdrawals there are no interest charges for a specified period.”

A final kick in the privates to Small Businesses

Following on from HMRC’s announcement on their refusal to accept credit cards in future, comes a further kick in the unmentionables from the Post Office. 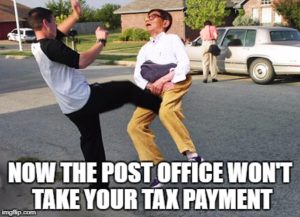 Another blow to small business

With effect from 15th December 2017, payments to HMRC will also no longer be accepted at the Post Office due to the withdrawal of the Post Office Transcash service. A HMRC spokesperson confirmed that the facility in its current form has been withdrawn by Santander. “HMRC is not the only users of this service and had no influence on this decision. We are writing to customers who have paid us via the Post Office to advise they will no longer be able to make payment using this facility.”

So much for HMRC’s promise to be all inclusive and allow special measures to protect the elderly and small taxpayers with problems; and please don’t get me on the subject of those bankers (excuse my spelling error) at Santander.