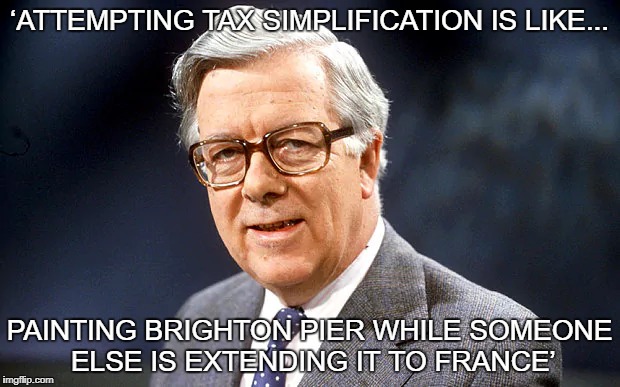 ‘Attempting tax simplification is like painting Brighton Pier while someone else is extending it to France’ is a well-known quote by the late Geoffrey Howe in relation to tax reform.

But John Whiting of the Office of Tax Simplification (OTS) adopted it recently in a speech describing the work his office was doing and what they were attempting to achieve.

Whiting’s arguments for attempting to simplify the tax system included:

He commented that the ‘Holy Grail’ of tax simplification would be when the taxpayer fully understands exactly what is required by the tax system, how to comply and believes the system to be fair’.

The causes of Tax Complexity

To understand how to simplify tax, you first have to appreciate the causes of complexity. The OTS produced a complexity index which examined ten factors which cause complexity in the tax system. They found these were a mixture of technical issues which need simpler tax rules, as well as administration factors which pointed to easier procedures; with the administrative factors being enormously important.

The OTS also identified that solutions to complexity must work for all parties; for example something which might be simpler for HMRC may cause more complexity for taxpayers (Making Tax Digital being a perfect example) and of course a procedure which is easier for taxpayers (for example filing paper tax returns) may give HMRC a shed load of extra work.

Even where tax simplifications are identified there are a number of hurdles to overcome which include:

Whiting emphasised that the task of tax simplification was not easy and would require perseverance. He urged his successors in the OTS to communicate what can and cannot be done, and make practical suggestions. However, the key would be to get HMRC onside and create some deliverables. There needs to be a capacity for change within HMRC and it will be necessary to tackle their “it won’t be worth it” attitude.

Where to begin With Tax Simplification

Whiting concluded that the best place to tackle tax complexity is at the start of the law making process. Simplicity should be built into policy development when the task of writing primary legislation, such as the Finance Bill, is undertaken. 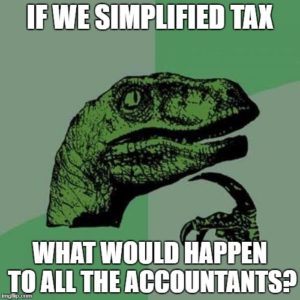 The OTS has suggested four principles to avoid complexity in the tax system:

In a question and answer session at the end of Whiting’s speech, accountant John Standing suggested that HMRC’s track record over the years would strongly imply that they deliberately make the tax system difficult to easily comprehend so that most ordinary taxpayers will not understand it.

John Whiting responded by saying that whilst the OTS considered that many of the rules were overly complex and in his opinion, unnecessarily wordy, he did not believe that it was HMRC policy to make it so.

John Standing clearly does not agree and nor do I; what’s your opinion?

HMRC New Taxpayers Charter
I’ve made a mistake with my tax, what do I do?
Disguised Remuneration: Where do you stand now?