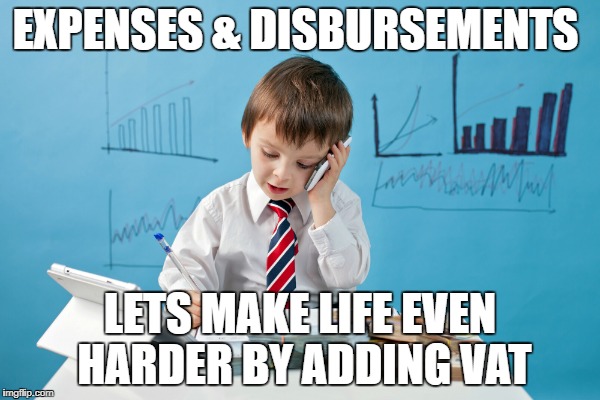 A common error made by many businesses, is to believe that their own expenses for example rail fares, legal fees, mileage and hotel costs to name but a few, will qualify as disbursements when re-invoiced to their customers. This is however not correct, as under HMRC tax law, a disbursement is an expense that belongs to the supplier’s customer rather than the supplier.

For example, when a solicitor deals with a house purchase on behalf of a client, he or she will often pay for expenses that belong to the client, e.g. local authority search fees, Stamp Duty Land Tax, and land registry fees. These expenses will eventually be paid for by the house buyer, so they are clearly the buyer’s expenses and not the solicitors.

A management consultant based in London will charge a fee of £1,000 to a client in Scotland. The customer will also pay the rail fare of the consultant for his return trip from London to Scotland (£250).

VAT will be charged on £1,250 and not £1,000. The rail ticket is the consultant’s expense and not that of his customer. In effect, the consultant is charging an increased fee to cover the cost of his rail travel.

The fee charged by an approved MOT test centre has always been outside the scope of VAT. The guidance in HMRC’s VAT taxable person manual says that a garage which is not approved as a test centre may arrange for a vehicle to be tested elsewhere as part of its service to the vehicle’s owner. The treatment of the MOT test fee in such circumstances is based on normal disbursement principles. In other words, the MOT test fee belongs to the vehicle owner.

From April 2014 to July 2015, Ellon Car Clinic Ltd was not licenced to carry out MOT tests on customer vehicles. It therefore subcontracted those tests to other garages, paying between £40 and £54.95 per test. It charged its customers a standard fee of £49.95 for each MOT test, so was losing money on some of the deals. However, it was keen to retain customers and deemed that it was only a temporary arrangement until its own MOT testing licence certificate was received. It did not account for VAT on the payments for MOT tests received from customers.

The company did not itemise the test fees as a separate entry on its sales invoices, so HMRC assessed output tax on the entire bill. HMRC said the company did not meet the conditions of a disbursement as specified in VAT Notice 700, para 25.1. However, the company took the view that the customers clearly knew that the business was acting as agent for MOT testing purposes and the payment should therefore be outside the scope of VAT for the MOT fee element. The tribunal judge agreed:

This is another example of HMRC placing too much emphasis on its published guidance (VAT Notice 700) that does not have the force of law. However, the taxpayer could have helped the situation by itemising the amount paid to the testing garage as a separate line on its sales invoice, clearly showing that it was a disbursement paid on behalf of the customer. Any surplus charge above this amount could have been shown as an ‘administration fee’ with VAT added at 20% on this fee only