Company directors don’t have to submit a Tax Return 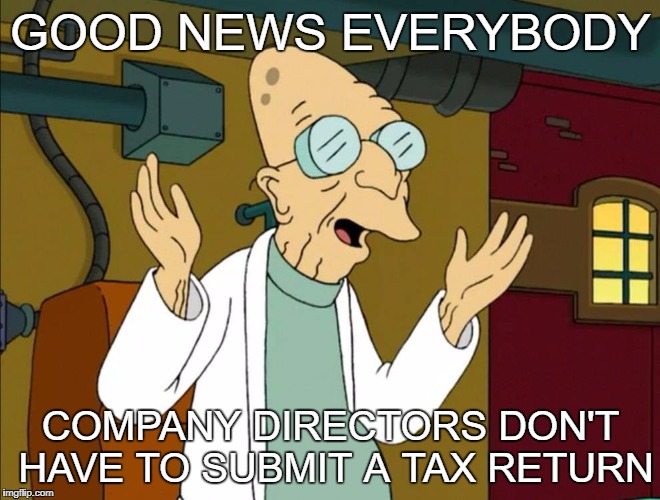 This was the headline grabbing conclusion of a tax tribunal case concerning late filing penalties and it confirms what many accountants tell their clients; that HMRC guidance is wrong.

The gov.uk guidance on directors’ responsibilities states “a company director must register for self-assessment and send a personal SA tax return to HMRC every year.”

Elsewhere on the HMRC guidance pages there is a list of who must send in a tax return, which says “You’ll need to send in a tax a return if, in the latest tax year: you were a company director – unless it was for a non-profit organisation (such as a charity) and you didn’t get any pay or benefits, like a company car.”

Both of these assertions are misleading, to put it mildly.

An individual must submit an SA tax return if they are issued with a notice to file a return under Taxes Management Act 1970 section 8(1). An individual who has not been issued with a notice to file a tax return under TMA 1970, s 8, or who has received such a notice but it was withdrawn, must nonetheless report to HMRC if they have income or gains which are chargeable to tax for the year (TMA 1970 s 7(1)). This report must generally be made by 5 October after the tax year end.

A director whose only income is taxed under PAYE, or has no taxable income at all, is therefore not required to report to HMRC or to register for self-assessment.

Mo Kadhem became a director of a property company on 21 May 2014. He received no pay or dividends from that company and didn’t register for self-assessment. It appears that HMRC registered Kadhem for self-assessment on 18 December 2014, and claimed to have sent him a notice to file an SA tax return for 2014/15 on 6 April 2015.

Kadhem asserted that he did not receive a notice to file a tax return, and he was not expecting to receive such a notice as all his income (from another source) was taxed under PAYE. He eventually submitted an SA tax return for 2014/15 online on 21 September 2016. This was in response to a £100 late filing penalty issued on 17 February 2016. Further late filing penalties totalling £1,200 were issued on 26 October 2016.

At the tribunal hearing, HMRC quoted the guidance which sets out director’s responsibilities, as published on gov.uk (see above). The tribunal considered that this guidance does not have the force of law and concluded; “this Government guidance notice does not accurately reflect what the law says.” The tribunal helpfully summarised: “if a person receives a notice to file a return he is under an obligation to file a return by the due date, but that is not what the Government guidance says”

The Tax Return lesson to be learned

The stubborn insistence by HMRC that all company directors must file an SA tax return has been a debating point for many years amongst accountants. In this case, HMRC was exposed by relying on guidance that does not reflect the law, and for keeping incomplete records of exactly where a notice to file has been sent.

Many accountants, including yours truly, have argued with HMRC in the past that the notice to file a tax return for their client should be withdrawn, but as HMRC frontline staff only have access to the incorrect HMRC guidance, and not to the tax law, such arguments are rarely successful.

Unfortunately, the cost of challenging HMRC’s opinion on whether a director should submit a tax return is generally well in excess of the cost of completing the unnecessary tax return.