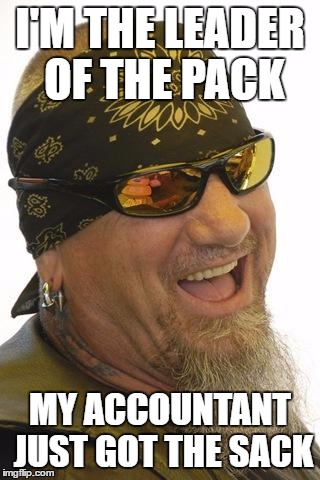 Hells Angels president Angelo Pandeli, 46, escaped punishment for tax fraud when his accountant stood up in court and took the blame.

Pandeli was accused of making fraudulent claims on his tax return for the 2014-15 financial year, but his accountant submitted an affidavit to court stating he was in fact to blame “The accountant has certainly fallen on his sword,” Magistrate Jennifer Atkinson commented.

Savers were be able to put their cash into the government’s new Lifetime Individual Savings Account (ISA) for the first time from Election Day with the launch of Skipton’s new product. Currently only three providers are offering the Lifetime ISA, but those require investment in shares.

The Lifetime Isa is designed for savers aged between 18 and 39 to buy their first home or for retirement, with the government offering savers a 25% annual bonus.

However the Skipton’s interest rate of only 0.5% when compared to other cash ISA’s, is relatively low with most cash ISA providers offering 1%.

Action Fraud has issued an urgent warning that scammers claiming to be from HMRC are contacting people demanding payment for outstanding debts. Victims are being contacted in a variety of ways and are being told they have an outstanding tax debt. In most cases they ask for payment in iTunes gift card voucher codes.

A statement by Action Fraud said: “Fraudsters like iTunes gift cards to collect money from victims because they can be easily redeemed and easily sold on. The scammers don’t need the physical card to redeem the value and instead get victims to read out the serial code on the back over the phone.”

One 87-year-old victim is reported as having been phoned by fraudsters who claimed to be from HMRC stating there was an arrest warrant out in his name. They told him it would be cancelled if he bought £500 in iTunes gift cards at Tesco. The man bought the cards and gave them the serial numbers.

Please be alert as HMRC will never use texts to tell you about a tax rebate or penalty or ask for a payment in this way; and remember telephone numbers and text messages are easily spoofed and should not be trusted.

Ingenious, an investment firm which sold and promoted film partnership tax avoidance schemes, used by in particular by celebrities especially footballers such as David Beckham and Wayne Rooney, has lost its long-running dispute with HMRC.

Beckham, one of 1,400 celebrity investors who put at least £100,000 in the scheme, is likely to make a substantial loss on his investment as the tax tribunal has severely reduced the amount of money that investors can claim back through tax.

The good news for Goldenballs is that the tax tribunal has also ruled that Ingenious were in fact trading with a view to making a profit. This crucial decision means that the investors have escaped being fined for aggressive tax avoidance.

HMRC has suffered another setback in its attempt to keep millions in VAT from travel companies taken under the Tour Operators Margin Scheme (Toms) when a VAT Tribunal ruled in favour of the collapsed Lowcosttravelgroup, which failed in July 2016.

It is the latest defeat of HMRC by the travel industry, with judges ruling that Lowcost had acted as agents and were subsequently not liable to pay Toms.

Judge Philip Gillett said: “In our view… the contract between Lowcost and the customer is one under which Lowcost is clearly acting as the agent of the accommodation provider. We concluded that Lowcost was not within the special VAT regime in Toms… on the basis that it was acting as a disclosed agent under English law”.

Lowcosttravelgroup had been attempting to recoup up to £2 million from HMRC at the time of its collapse, according to Chris Photi, head of travel and leisure at White Hart Associates, who said “HMRC have been knocked out of the park on this one”.

HMRC is thought to be holding on to up to £100 million in VAT refunds relating to eight cases, but they can now seek further judgments all the way up to the European Court of Justice, although Brexit means this final step may be unlikely.

MJ&Co Accountants fight the Severn floods!
Is a dog your best friend or a tax-deductible expense?
VAT Evader Trader