Do they still work with HMRC? 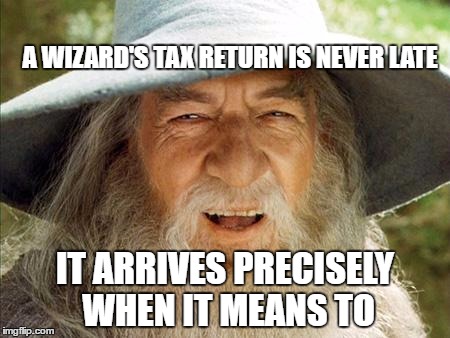 The quick answer has to be yes, but you have to make sure that you have all of your ducks in a row before entering into the appeal process.

So, I’ve trawled the Tax Tribunal cases from the last few months and looked at cases appealing late filing or late payment penalties, where the taxpayer argued – and won – on the grounds of reasonable excuse.

The cases I’ve highlighted here are a mixed bag, but in view of the imminent arrival of Making Tax Digital one trend worth noting is the potentially disruptive impact of technology and following on from this is the challenge the tax system presents to vulnerable taxpayers trying to engage with HMRC.

This case was a victory for taxpayer Paul Hindocha, who appealed against nearly £1,500 in penalties for late filing and late payment. Hindocha put forward a diagnosis of anxiety and depression as his reasonable excuse.

This case is significant for the clarification HMRC has given as to what type of health conditions can give grounds for claiming reasonable excuse claim. HMRC’s contention was that this case was concerned with the ordinary everyday responsibilities of the taxpayer and stated “where illness is an ongoing condition, the appellant would be expected to make arrangements for making and sending the tax return in on time.” In this case, it argued that 5th April 2012 to 31st January 2013 was “sufficient time under most circumstances.”

Day to day Letters from Hindocha and his son explained that it was exactly the day-to-day routine that Hindocha had been unable to cope with. The Tribunal chairman commented, “HMRC would agree that a major heart attack, stroke or any other serious mental or life-threatening illness as a reasonable excuse, but they won’t agree that ongoing severe anxiety, panic attacks and depression constituted a ‘serious’ mental illness, I disagree with their interpretation”.

The chairman accepted that the mental illness had affected Hindocha in such a way that he was unable to make the type of arrangements HMRC expected. His “day-to-day living has deteriorated along with his quality of life … not actually being able to get the menial day to day activities done, let alone his finances and taxes.”

Mr Laverty had moved to Vietnam for work and had appointed accountants in Belfast to act on his behalf and his accountant notified HMRC that Laverty’s main residence in Glasgow had been let out. Problems arose because Laverty didn’t receive post in Vietnam, and the authorisation process to notify HMRC of his appointed agents via form 64-8 went awry.

Laverty’s agent explained that there is “no residential post” in their client’s part of Vietnam; however HMRC maintained that it records undelivered correspondence as delivered unless there are records to show that any mail was returned undelivered. “Therefore these documents are deemed to have been served within the ordinary course of postal delivery in accordance with the Interpretation Act 1978,” stated the Revenue. 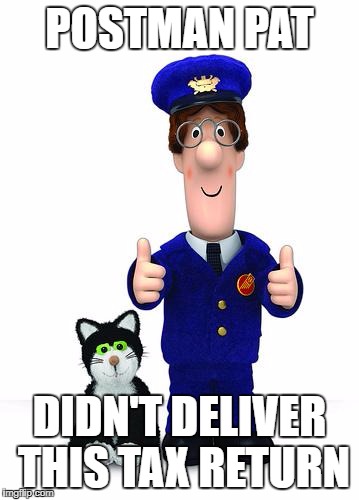 The Tribunal expressed doubts as to whether the Interpretation Act applies in Vietnam and if HMRC’s procedures cover return of undelivered post there. The Tribunal also noted the lack of reply to Laverty’s agent when he raised questions about the way 64-8s are processed. “HMRC’s statement of case is silent on the subject and I find that silence deafening,” said the Tribunal chairman.

The Tribunal found that Laverty had taken ‘adequate steps’ to take care of his tax affairs in his absence by appointing an accountant as agent and completing a 64-8. “The appellant would not have expected HMRC to fail to process that form so that the accountant did not receive the copies of correspondence from HMRC,” the Tribunal noted.

As soon as Laverty returned to the UK he checked the position regarding his tax returns, and the outstanding returns were submitted within six weeks. Whilst the reasonable excuse came to an end in January 2013 with his return to the UK, the delay in submission “was rectified within a reasonable period on 7 March 2013.” The Tribunal accordingly upheld Laverty’s appeal against penalties of £1,700 for failure to submit Tax Returns on time.

Mrs Connors had posted her 2013/14 Tax Return to HMRC on 29th May but HMRC claimed not to have received it. Luckily for Mrs Connors she had a Royal Mail ‘signed for’ slip, counter-stamped by the Post Office and could therefore prove her return had been sent on time, even though HMRC maintained that the return couldn’t be located on the Parcelforce Track and Trace system.

The Tribunal judge having upheld the appeal noted that if Connors’ envelope hadn’t been handed across the counter, the audit trail would not have existed. He also commented that just because HMRC had not recorded a Tax Return as being received, it doesn’t automatically follow that the taxpayer is at fault.

This is a case of two limited liability partnerships run by the same husband and wife team, who appealed against penalties for late submission of partnership returns.

The problem arose because the couple had submitted their partnership returns as PDF documents along with their individual SA Tax Returns submitted online. The partners, a Mr and Mrs Galvin, said they had checked with the tax office the previous year that using the PDF attachment route “was an acceptable means of delivering our Partnership Returns.”

Having – as they understood – been given the green light, the Galvins repeated the procedure for the 2013-14 returns. Not only had the partners filed the PDF copies online, they had also sent in paper copy “to make doubly sure”. 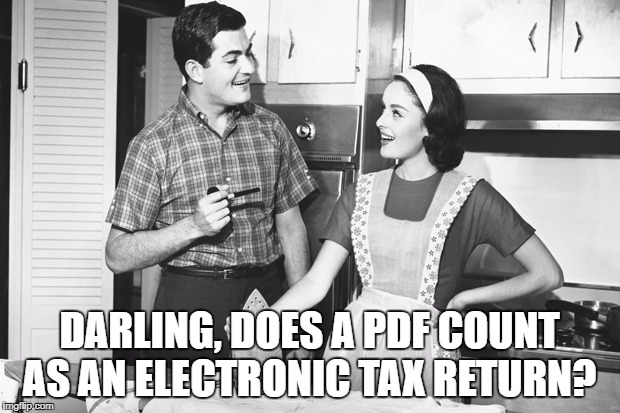 HMRC maintained that the Galvins had misunderstood the position because previous late filing penalties had been cancelled when the same PDF filing procedures had been followed. Attaching a PDF was “not an acceptable method of filing your Partnership Tax return,” HMRC stated. HMRC did, however, acknowledge that “with hindsight” it should have ‘taken the opportunity to educate Mr Galvin’ on the proper procedure’.

What Catagory does a PDf fall into?

One of the points Tribunal had to consider was how to categorise a PDF file. Is it or isn’t it an electronic return? And what are the knock-on implications in terms of filing deadlines? Electronic returns go through the government gateway and don’t require a signature. Non-electronic returns don’t go through identity and security checks and therefore need a ‘wet signature’.

In this case, Tribunal decided that the Galvins had submitted a non-electronic return. Unfortunately it wasn’t signed, so HMRC duly returned it. The Galvins dealt with the matter promptly and signed the forms and returned them to HMRC, however it was 7th February 2014 when HMRC received the returns. But with the online filing deadline being 31st October 2013, this left the Galvins open to daily penalties.

The Tribunal, however, accepted the taxpayers’ belief that they had cleared the use of PDF attachments with the tax office. HMRC “failed to confirm in writing that it was unacceptable and that the partnership return must be submitted on its own … on paper by 31 October or online using 3rd party software by 31 January following the date of issue,” and upheld the appeal.