How HMRC won the battle of Pirate Island 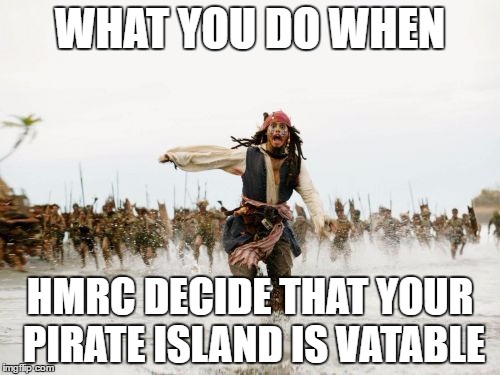 Today Davy Jones will tell you the tale of how the timing of planning permission in a VAT dispute with HMRC meant a taxpayer walked the 20% rated plank.

My Own Private Pirate Island

It doesn’t matter how old you are, most of us would love to have our own little island. The curious case of The Master Wishmaker Limited concerned a taxpayer who loved all things piratical and commissioned his own ‘Pirate Island’ including a dwelling, for his own personal recreational use.

The development – known as Challis Island – involved the creation of five structures on a discreet piece of land, jutting out into a lake. It depicts an abandoned 18th century colonial island with run down Georgian-style buildings with a channel being dug to create a sort of island. Most of the construction work was liable to the standard rate of VAT, but the developer believed that the zero-rate should apply to the construction of the main dwelling to be known as Coffer Cabin.

The Question the Tax Tribunal had to answer: Is Coffer Cabin a dwelling?

The issue at the heart of the dispute was whether or not Coffer Cabin was “designed as a dwelling” for the purposes of VAT Act 1994, Schedule 8, Group 5. If the cabin fell within item two of this group, namely it was ‘the right type of building’, the construction services are zero-rated. If however the cabin was not designed as a dwelling, the construction services are standard rated.

What is “the right type of building’”?

To fall within the provisions of Group 5 as being designed as a dwelling, the property has to meet four specific criteria to qualify as ‘the right type of building’:

The reason for the tribunal’s decision was all to do with the timing of the planning permission. There were two separate planning applications; the first in September 2013 which was later withdrawn; the second in November 2013, by which time the work was finished.

Retrospective planning permission was granted in February 2014. However the tribunal agreed with HMRC’s contention that the wording of Note 4 above, means that the planning consent should have been granted before the supply of construction services was made; which normally means before the work is carried out. It is therefore difficult to argue that they got it wrong on a point of law.

The frustrating thing about this case for Master Wishmaker is that with a little bit of forethought and advance planning, the construction would have met the criteria and saved the client significant amounts of “pieces of eight”.

I consider that whilst HMRC were correct on a technical point of law, once again we find that a Tax Tribunal has agreed with HMRC and upheld the dubious principle that it’s not the spirit of the law that is important, but the letter of the law!

Perhaps HMRC should consider applying this dubious principle to tax avoidance, because if not it definitely smacks of double standards!