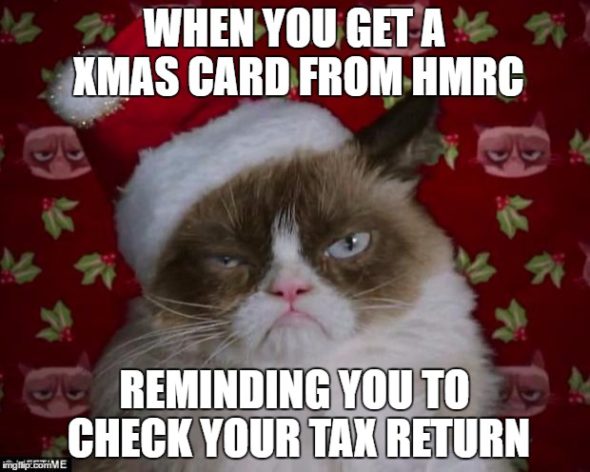 Tens of thousand taxpayers received a letter from HMRC just before Christmas; however these festive letters didn’t wish the recipient season’s greetings, but suggested that the individual concerned should review their 2014/15 self-assessment tax returns.

These so-called pre-Christmas nudge letters, an initiative first introduced by HMRC’s Behavioural Insight Team (BIT), aimed to prod taxpayers who may be underpaying taxes, in particular those who have declared any bank interest on their 2014/15 tax return.

However, the timing of the letters caused many commentators, especially the national press to label HMRC’s efforts as “far from festive” and “did you receive a letter from Scrooge”.

According to the accountancy firm RSM the letters led to HMRC being “inundated” with calls from concerned taxpayers; and to stir the pot and cause further annoyance, the letters omitted a noticeable addressee: the recipient’s accountant.

Are the figures on your Tax Return Right?

In the letters, which all went out in the week before Christmas, HMRC wrote: “It’s important to make sure that the figures shown on your tax return are right. Sometimes people make mistakes because they don’t take enough care while others deliberately get their figures wrong.”

HMRC then pointed out that it is the individual’s responsibility to make sure their tax return is complete and correct, before giving asking them to “reconsider” the entries on their return.

The letter then outlined what the individual should do: check their tax return entries are complete and correct, and if there’s a mistake, to amend it and inform HMRC.

But in its weekly tax briefing RSM complained that the letters will cause concern to “law-abiding people who fully believe they have disclosed everything properly”, and asked whether this approach to tax compliance is justifiable.

“Having raised these issues with HMRC we are told that the department has no information to suggest that the individuals targeted have missed anything off their returns, apparently it’s just a case of asking them to double-check,”

Although the timing of the letters caused RSM to brand HMRC as “Scrooge-like”, according to research the theory behind nudges actually works.

The results spoke for themselves: the first group increased by 34%; the second group by 59% increase; and the third group by 22%.

Michael Hallsworth, the BIT director of health and tax, said the effects of these prevention letters “endured even after HMRC had undertaken other enforcement actions” and the payment rates from those receiving letters were still higher.

More recently, HMRC attached post-it notes on letters to tax avoidance scheme users. This approach was inspired by a US study which found that people are more likely to respond to the personal touch, like handwriting the person’s name or a post-it note.

While it will take several months to collate the data from the current campaign to determine its success, an HMRC spokesperson said: “We have written to several thousand customers who appear to have under-declared untaxed interest to encourage them to get their tax affairs up to date and get things right from now on. We are offering help and support to do that.”

Are certain taxpayers being singled out?

“No” says HMRC, “Yes” says almost everybody else. Bearing in mind that when asked, HMRC admitted that they had no evidence to suggest the letters’ recipients had actually under-declared tax, so why send out the letters?

The biggest single group who received these letters were old age pensioners and according to RSM the taxpayers concerned were subjected to unnecessary stress by the nudge letters, which also contained the threat of penalties.

In my opinion, not only do I question the timing of the letters, but also the group targeted. Does HMRC really want to anger and upset this group of normally compliant and overwhelmingly innocent taxpayers.

I agree with RSM and support their call for HMRC to think more carefully about the deeper implications of future ‘nudge’ campaigns; especially with no evidence of wrongdoing.

Tax Changes To Income from Property
HMRC are finally taking on the tech giants
UK Tax Questions Answered by Shrewsbury Accountant No.29