11 Lame excuses for being late for 31st January deadline 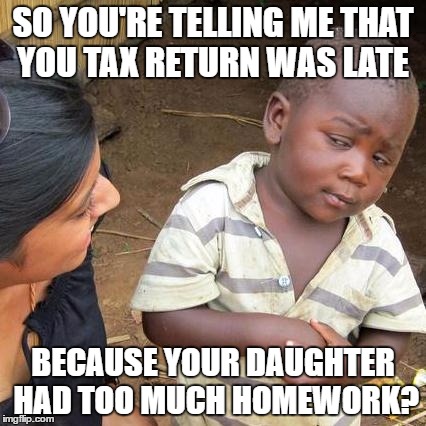 All accountants are incredibly busy in January trying to get everyone’s Tax Returns submitted to HMRC before the January 31st deadline. However clients don’t always appreciate this and despite getting a written reminder from us in early October, it seems that for a small but significant minority of them, that its only on 1st January the they wake up to the fact that they need to get their records in to us.

We always tell them that because they’re late we can’t guarantee being able to meet the deadline, but by working long hours we usually do. The clients, of course, express their heartfelt gratitude and promise faithfully to get their record in early next year; and by early I mean within 6 months of the tax year end on 5th April. However despite their fervent promises to do better next year it’s always the same individuals who trail in in early January with a variety of mostly lame excuses, as to why they’re late yet again.

So as it’s that time of year once more, I thought I’d share with you some of the more inventive excuses I’ve had this January, together with what I really wanted to say in response:

1. “My wife had this awful cold that went on for weeks and then I got it.”

So your family cold season lasted from April to December

2. “I never have any time and its only over the Christmas holidays that I’ve got time to sort everything out.”

You could consider not going to every Shrewsbury Town match, home and away, followed by an evening in the pub

3. “I sat down to prepare my records in August, but found that my wife had shredded my bank statements.”

4. “I’d lost a lot of my receipts for petrol etcetera and didn’t know what to do.”

Do what you do every year when this happens and give me your credit card statements, but 3 months earlier

5. “I moved house, which was very disruptive and time consuming.”

I can see it was time consuming, about 9 months in fact

6. “My aunt died and I had to spend a lot of time sorting out the funeral etcetera.”

See answer to No5

7. “I don’t really understand this tax stuff and get confused on what I can claim for.”

Buy yourself a Dictaphone and record my advice on what to claim, the same advice I’ve given you every year for the last 10 years

8. “I didn’t have a car for several weeks and couldn’t bring the record ‘cos they’re heavy.”

Next time take a taxi, it’ll only cost you a fiver as you only live a mile from our office

9. “I’m not good on spreadsheets so my 16 year-old daughter has been helping me, but most days she has a lot of homework.”

So you had 3 months to sort out your records

11. “I work on building sites and have 20% deducted from my invoices, which means I’m due a refund so I didn’t think it mattered when I brought my records in.”

Oh yes it does, refund or not, you’ll still get fined for being late

In most case I managed to contain my desire to point out the blindingly obvious and make a sarcastic comment, but boy oy boy, was I tempted!