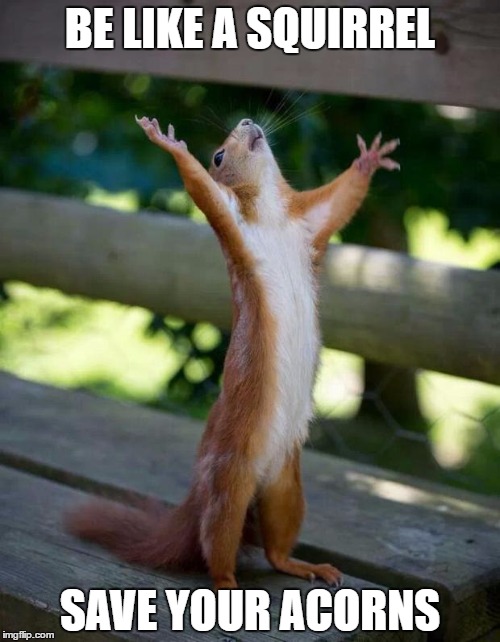 Wouldn’t it be nice to have upwards of £50k in your bank account by the age of 40,; unfortunately for most people, saving more than a grand or two seems impossible.

Indeed, in a recent survey 16 million people in the UK have savings of less than £100. Now some of this group are on low incomes and say they do not earn enough to save anything; but is that really a valid excuse?

So how should you do it?

A leading campaigner to get us all to save more is Robert Gardner, chair of the Children’s Savings Policy Council, and author of a new children’s book called Save Your Acorns.

In the story, the monkeys eat up all the bananas they have, the bears eat most of their berries and only store what’s left over. But the squirrels do something different entirely. Before eating any of their acorns, they save 20% of them, and learn to live on those that remain. Those saved acorns grow into oak trees, with even more acorns.

“The point is that saving doesn’t mean you can’t enjoy things in life,” says Mr Gardner. “But it’s about budgeting. You get 10 and bank two. That two is what will help you in the future.”

So how does this acorn philosophy work in practice? For example, stop buying, one cup of takeaway coffee every day and save that £2.50 and invest it in the government’s new Lifetime Isa, which is due to launch in April 2017. If you invest it in shares, rather than cash, current growth trends mean it could grow by 7% a year and don’t forget, the government will add 25% to each annual investment you make.

Mr Gardner says that if you keep up the savings every day between the ages of 18 and 40, with a combination of the government bonus and compound interest, you could end up with nearly £60k.

But before you get carried away, there is a catch. To receive the 25% bonus you will need to spend the money on a house or flat, or save it until you are 60. Otherwise, according to the rules of the Lifetime Isa, you would forfeit the government bonus.

The following list isn’t meant to be exhaustive, but is used by the government-backed Money Advice Service (MAS) as areas in which most low to middle earners can save:

However, experts at MAS believe it can be more fruitful to engage positively with saving, for example by setting a particular goal.

As part of its savings challenge pilot scheme, MAS asked 22 people to try to save £100 a month for three months and it was left up to them to decide how they were going to do it.

On average, those who took part managed to save £447 over the three months. After six months, although one or two were derailed by leaking roofs or ill pets, the average amount saved was still over £600.

“The thing that motivated people – almost without exception – was the challenge,” says Paul Taylor, head of digital at MAS. “It was fun. And six months down the line there was a sense of automation.”

Nick Hill, money expert at MAS said, “The key thing is just to give something a go, start getting that momentum happening. It’s amazing what small tweaks people can make to really start building up those savings.”

Now If all that sounds like hard work, there is a new way of saving that involves doing precisely nothing.

Mobile phone apps, can now work out when you’ve got a couple of pounds spare in your current account, and automatically switch them into a savings account.

The leading two are, Plum and Chip both are recommended by the MoneySavingExpert website. They work as so-called bots on Facebook Messenger and you can see how much money you’re saving via your phone

The bots use algorithms that analyse your spending patterns, compare them with forthcoming income, and calculate what cash you don’t need. They then move that sum – possibly as little as £10 a month – into an account that pays interest.

“We wanted something that would take decision-making out of people’s hands and automate it,” says Plum’s co-founder Victor Trokoudes. “I love it when people say they can’t save, because everyone can save. It’s money coming out of your account in small amounts. But over time it accumulates.”

In other words, act like a squirrel, you know it makes sense.