How to Win a Tax Tribunal – Prove where the Money Went 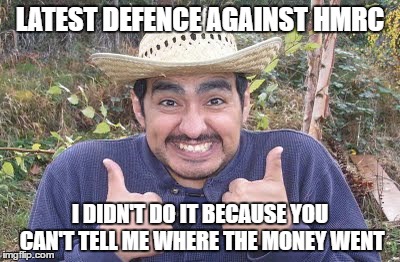 “I can’t possibly have earned the profits which HMRC is suggesting – if I did, where has all of it gone”

Mr Allen’s Tax Return had shown sales of £38,437, expenses of £19,435 and a Net taxable Profit of £19,002; however a total of £8,500 had also been paid into his bank account during the year which was not included in the sales figure. Mr Allen claimed that this ‘other money’ was from the sale of an old motorbike and various small gifts from his mother, but crucially, he had no evidence to back this up.

He attempted to argue that it was up to HMRC to prove that the unexplained lodgements into his bank account, despite the absence of proof that they were non-taxable payments to him, were not business income, which got him absolutely nowhere. The tribunal had to remind him that once an irregularity has been proved (which it had in this case) it was up to the taxpayer to demonstrate why HMRC’s assessment were wrong.

In an old 1978 case (Johnson v Scott) the court summarised the position thus: it is impossible to see how the Crown, in cases of this kind, could do anything else but attempt to draw inferences. The true facts are known, presumably, if known at all, to one person only, the taxpayer himself.

That does not mean that HMRC has complete carte blanche to make up the numbers. They must have some semblance of reality. HMRC have been criticised in the past by tribunals for producing figures which are completely over the top. However this is relatively rare: once an irregularity has been demonstrated the solution really lies in the taxpayer’s own hands. HMRC does not have to prove anything and provided that their proposed assessments are not ridiculously high they will stand. However unfair this might seem to clients – and it does often seem very unfair – the law is very clear.

As to where the money goes – the problem is that small irregularities soon mount up. Let’s assume a trader takes £10 out of the takings every day to buy his lunch, newspaper etcetera and “forgets” about it when computing his takings for the day. Assume that he works 5 days a week and for 45 weeks a year, this adds up to £2,250 per year. If we also assume the investigation goes back the normal permitted maximum of 6 years. The total amount of omitted income adds up to £13,500 which at 40% gives a potential tax bill of £5,535. I think everybody underestimates to some extent the amount he or she spends. If you look back 6 years at your own spending on everyday items you may well ask yourself: “where did the money go”.

Burden of Proof Rests with HMRC

The burden of proof is however quite different for penalties. The burden in penalty cases rests squarely with HMRC. HMRC cannot simply say: “we think you omitted income deliberately. We will charge you a penalty unless you prove otherwise”. It is for HMRC to prove their case. That is not of course to say that HMRC will not try to reverse the burden. Accountants have to be vigilant in ensuring that they protect their client’s interests and in some cases, this may involve taking an appeal to a tribunal.

In the Tax Journal last year, there was a thorough review of the case law on this subject and showed that in the right circumstances it is well worth appealing. Few taxpayers will want to do this, and I know from my own experiences of taxpayers with tax investigations, that many of them in the end accept a penalty simply to bring matters to a close. But the law is there to be used by both sides. I have no problem with HMRC charging penalties in cases where there has unquestionably been a deliberate understatement of profits by the taxpayer. However I also strongly support the right of taxpayers to assert their legal rights and insist that HMRC properly adhere to the rules about burden of proof.

There are additional wrinkles to the rules on burden of proof, particularly where HMRC is looking to go back to years beyond the normal maximum of six, but in these cases the burden of proof falls squarely on HMRC’s shoulders and they pretty well have to prove that systematic and consistent tax fraud has taken place, to be allowed to go back further. In reality, as a taxpayer can legitimately destroy his or her records after six years, HMRC very rarely take the risk.