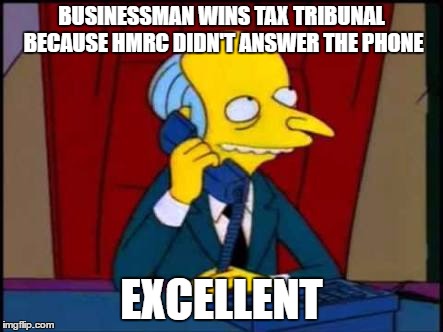 A business has won an appeal against a fine for late payment of VAT because its tax agent was unable to talk to HMRC on the phone to request more time.

Patrick McNamara the owner of McNamara Joinery Ltd telephoned HMRC on 4th February 2016, three days before his VAT payment was due, to request more time to pay the tax due to his business’s temporary cash flow problems. The line was almost constantly engaged and when he did get through the line kept disconnecting.

After spending a good part of the day becoming ever more frustrated, he contacted his accountant for help. As accountants have a special ‘agents number’ to call, he readily agreed and whilst the line wasn’t constantly engaged he experienced the same problem as Mr McNamara as the call kept on disconnecting.

Eventually after a week of trying the accountant finally got through on 12th February, and HMRC readily agreed to a two-week extension, with the taxpayer paying the VAT in full on 20th February within the timescale agreed. Two weeks later however, Mr McNamara received a penalty notice which stated that he did not have a reasonable excuse for paying the VAT late and charged him a penalty of £490; so he appealed.

The chairman however, accepted that the business and its accountant did all they could to contact HMRC about the problem. He also said he did not accept HMRC’s submission that the business and its accountant should have been aware that there was a strong likelihood that there would be a large volume of calls being made to HMRC on the days immediately prior to the due date and that as a result they should have expected delays in being able to make contact.

“HMRC does not publish times when their lines are likely to be busy. Rather than expecting delays it is reasonable for a taxpayer to expect telephone calls to HMRC to be answered without delay.”

The tribunal agreed with HMRC’s comment that ‘time to pay agreements’ should be made on or before the due date, but the tribunal also said that if a taxpayer is unable to make contact with HMRC before the deadline “that must be considered as a reasonable excuse for the late payment.” , Mr McNamara won his appeal.

I’m pleased to report that despite an appeal by HMRC, Mr McNamara won and was awarded costs.

Lack of English is not a reasonable excuse

Not being able to speak English and relying on an accountant are not reasonable excuses for late payment of a tax penalty a tribunal has ruled.

Tian Chai Chen, the owner of a Chinese restaurant in Dunblane, Scotland, said he could not speak or read English and relied on his accountant to sort his tax affairs. So when Chen was fined for “negligently” submitting incorrect tax returns for 2010-2011 and 2011-2012, he appealed although his appeal was two years late.

Chen argued that his inability to speak English meant he relied on his accountant who read him correspondence from HMRC every six months or so; but the Tribunal judge said that this twice-yearly correspondence showed a “complete disregard for the proper management of his business affairs”. This meant Chen did not have a reasonable excuse for his late appeal against the penalties.

“I have considered all relevant circumstances put before me, and while I have some sympathy for Mr Chen’s position, that sympathy is limited and is not sufficient, having regard to those circumstances, to grant permission to Mr Chen for an appeal to be made or notified some two years after the expiry of the statutory period,”

A taxpayer was issued with a £5,726 penalty after her Tax Return was not received by HMRC by the January 31st deadline. Mrs Hauser stated that her husband had keyed in the data and submitted the Tax Return online on 31st January and she posted in a paper copy the same day.

The appellant produced to the Tribunal screen-shot evidence that the Tax Return had been accepted as well as a print of her Tax Return at the stage where it invites the person completing the form to save and if required, print a copy. HMRC argued that the screen would also have displayed ‘not submitted’, but Hauser remained defiant against HMRC’s claims.

The tribunal accepted that Hauser attempted to deliver the tax return on time. Whilst they questioned why HMRC’s subsequent warning letters didn’t trigger Hauser to check online, they accepted that she did resubmit her form once HMRC informed her that a glitch may have prevented her not being captured.

The chairman said, “If a taxpayer unwittingly misses the self-assessment deadline and that mistake is a genuine error, HMRC are not entitled to charge a penalty. “ HMRC agreed to withdraw the penalty.

Terminal illness is not a reasonable excuse

A Tribunal has ruled that a taxpayer did not have a reasonable excuse for paying his tax late, just because he had a terminal illness.

David Cooper collapsed on July 10th 2014 and was diagnosed as having an inoperable brain tumour and his wife told the tribunal his illness prevented him from paying the tax due by 31st January 2015, which was why she was appealing on his behalf against three penalties imposed by HMRC for late payment of tax.

HMRC said that although it was and remains compassionate to Cooper’s personal circumstances, to have a reasonable excuse for paying tax late an individual must show that he or she has taken action to correct the breach of an obligation as soon as possible and argued that Cooper had not done this.

Despite his health problems, Cooper had filed the 2013-14 Tax Return electronically on 6th January 2015 on time and as part of the filing process he had calculated his own tax liability and entered the figure on to his own tax return, which showed his tax liability as £2,320.68.

After filing the tax return HMRC argued that Cooper or someone acting on his behalf would have been able to pay the tax using by transferring money electronically via the same online system. They also said that in circumstances such as Mr Cooper’s they would have agreed to allow him to settle his tax debt in instalments, but to avoid a penalty, they require that contact be made prior to the penalty date.

HMRC said that there was no evidence to show that Cooper or his representative (his wife) had asked HMRC for help with paying the tax due and unfortunately for the Coopers, the Tribunal agreed with HMRC.

HMRC Lose to Charity at PEC VAT Tribunal
Coronavirus Tax Questions Answered by Shrewsbury Accountant No.4
How to reduce your Capital Gains Tax by up to 18%