What happens when you cross the VAT threshold by Accident 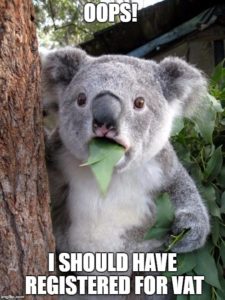 Here is a horror situation: I am preparing the Annual Accounts and Tax Return for a client in January and discover that he exceeded the VAT registration threshold over a year ago. In other words, his taxable sales have exceeded £83,000 on a rolling 12-month basis.

But there is a potential escape route to avoid a hefty VAT bill and a late registration penalty; this by asking HMRC for an ‘exception’ to being VAT registered if it was a trading blip that caused the business to exceed the registration threshold, eg a one-off large sale that won’t be repeated.

Note that an ‘exception’ to registration is different to an ‘exemption’. HMRC may agree to an exemption when a business has a lot of zero-rated sales, so the input tax for the business would regularly exceed output tax. In that case the business would be in a repayment situation if it registered for VAT, and there will have been no loss of revenue arising from the late registration.

Look back in time

The challenge with an exception request is to look at the known facts at the time the business was first liable to register for VAT. You must mentally take yourself back to that point in time and ask the question: ‘Do we expect our taxable sales in the next 12 months to be less than the deregistration threshold?’ HMRC won’t accept evidence of the actual turnover figures a year later as the basis of an exception request; they need to see proof of the business’ outlook on the day it became liable to register for VAT.

Ken Renforth traded as a builder and was liable to be VAT registered from 1st April 2013. But this was only established when his accountant was preparing his 2012/13 self-assessment tax return in January 2014. He asked HMRC for an exception but his request was rejected.

The problem was that Renforth quoted his actual turnover figures to HMRC. As explained above, the challenge for the taxpayer is to identify the known facts at the time the turnover tipped over the registration threshold, and whether it can be said with certainty at that time that the sales in the next 12-months would be less than the deregistration threshold. Renforth couldn’t provide this certainty and the First-tier Tribunal dismissed the appeal.

The other problem was that Renforth was part way through a long-term contract at the end of February 2013, with no clue about when it would be completed. So a request for an exception to registration would have been difficult to justify.

The case of Green Finger had an extra twist to the tale. HMRC rejected the partnership’s request for an exception to registration and confirmed in writing that it owed £2,688 VAT for the late period.

However when the VAT assessment arrived in the post, it was actually for £14,888, over £12,000 more than agreed. HMRC said that the figure of £2,688 was a typing error and they rejected the taxpayer’s appeal that he should only pay this amount, because he hadn’t submitted a VAT return for the late period, so had no basis of appeal.

The taxpayer’s argument for an exception to be granted was that he had carried out landscaping work worth £6,500 that had pushed him over the VAT threshold and that this work was a ‘one off’ and would not be repeated. He also stated that one of the partners retired from the business, and he had suffered ill health so reduced his subsequent trading to three days a week.

HMRC refused the exception request and said there was only evidence of reduced trading in the succeeding year, so it went to the First-tier Tribunal, who luckily for Green Finger, disagreed that HMRC’s decision was reasonable and agreed with the taxpayer that he had provided sufficient evidence for an exception to get granted.

But were HMRC right to enforce the higher amount of £14,888? The tribunal clearly thought not and showed sympathy for the taxpayer and commented that “HMRC will no doubt give careful consideration to the question of enforcement of the assessment dated 30th October 2014 and urgently review the matter.” HMRC subsequently withdrew the assessment.

The above two cases, highlight the need for all non-VAT registered businesses to carefully monitor their turnover, particularly when they are close to the current VAT registration threshold (£82,000 for 2015/16 tax year and £83,000 for 2016/17 tax year).

So what should you do if you are trading close to the VAT threshold?

In this example, as the registration threshold was exceeded in June 2016, the VAT office should be notified in July 2016, with VAT registration effective from 1st August 2016.

This is a good example of why it’s important to use an accounting / book-keeping system to keep on top of your income and expenses, or if you don’t want to fork out for a software package and are good with spreadsheets, you can always use EXCEL to monitor your turnover.