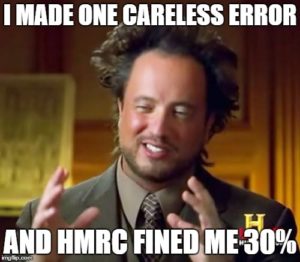 What Is a Careless Taxpayer Error?

A careless error is defined as an outcome that has resulted from an action performed without taking due care. This of course has a special resonance in the tax system as from 1st April 2009 HMRC has had the power to charge taxpayers penalties when they make careless errors in tax returns or documents, a subject that I’ve touched on many times in the past.

If the error or mistake occurred in spite of the taxpayer taking due care, in other words they weren’t careless, then HMRC cannot impose a penalty. The amount of penalty which can be imposed is significant and can be up to 30% of the tax due or postponed, so it is worthwhile for the taxpayer to show he made an innocent mistake whilst taking as much care as he should be expected to.

What is HMRC’s starting position on Taxpayer Errors

HMRC’s default position appears to be that all taxpayer errors are careless and potentially subject to penalties. The judgement required to determine if the taxpayer’s actions were careless or not, is more often than not, subjective. This is why arguments over the level of care taken by the taxpayer (or their agent) often end up before the tax tribunals.

Around 40% of cases taken before the First-tier Tax Tribunals relate tax penalties of some sort, but not all of those cases include a careless error argument. Due to the time-lag involved in taking a tax case before the tribunal some cases will partly relate to tax periods before the current penalty regime came into effect on 1st April 2009.

Errors contained in tax returns or documents delivered to HMRC before 1 April 2009 are subject to the old penalty regime, which didn’t involve a test of careless behaviour.

When HMRC deem the taxpayer’s action to be deliberate, it can be very difficult, almost impossible in most cases, to definitively prove that the error was a completely innocent mistake. In such cases the taxpayer may accept they were careless, but can argue it was a one-off mistake. In that situation HMRC can agree to suspend the penalty.

A suspended penalty is not payable if the taxpayer abides by certain conditions for a defined period – usually two years. Only penalties for careless errors can be suspended. If the tax error was deliberate the penalty can’t be suspended. If HMRC refuses to suspend a penalty, that decision can be challenged at the tax tribunal.

HMRC’s own guidance on when and how a penalty can be suspended has evolved since 2009, and the courts have also developed the scope of conditions which a taxpayer can be asked to meet for suspension of a penalty. A favourite condition for the tribunal to suggest is to have a qualified accountant or tax adviser prepare the tax return for the next two years.

Using a tax agent is not a fool-prove defence against accusations of carelessness. Taxpayers are supposed to check that the advice they receive is reasonable and to ensure that they appoint a suitably qualified adviser. If those conditions are met it is normally accepted that a taxpayer has taken reasonable care, even if HMRC disagrees with the adviser’s opinion.

However, a blatant error, such as a buy-to-let landlord omitting three month’s rental income, won’t be regarded as careless, even where the mistake was apparently made by the tax agent.

Looking at the tax tribunal records, reported thusfar in 2016 and by analysing them, a number of definite trends can be identified:

So there you have it folks; in summary if the error is clearly not deliberate and you as the taxpayer can reasonably argue that you’ve checked what your accountant has prepared to the best of your ability, then you had a good chance of overturning or suspending any penalty imposed by HMRC.