HMRC Lose to Spurs in the Tax Tribunal Cup Final 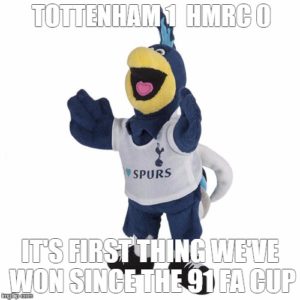 A recent court case in which HMRC tackled Tottenham Hotspur and received the court equivalent of a red card, has implications for anyone made redundant, so read on,

In this case, HMRC tackled termination payments paid to former England striker Peter Crouch and Wilson Palacios. On transfer deadline day, August 2011, the pair were deemed surplus to requirements by Tottenham as the club sought to reduce its wage bill.

The Tribunal heard that Matthew Collecott, group operations and finance director of Tottenham, sent a text message to Melvyn Gandz, Crouch’s accountant, stating that the forward would not form part of the 25-player squad eligible to play in Premier League matches.

As not playing for the remaining two years of his contract would have had an adverse effect on Crouch’s career, he reluctantly agreed to a transfer to Stoke City. After negotiations involving Melvyn Gandz and Peter Crouch, Tottenham agreed to compensate the player for ending his contract early.

Midfielder Palacios, who had a further three years left to run on his contract, also joined Stoke on transfer deadline day, and was given a contract termination payment of £1.5m by Spurs, the judge heard.

HMRC argued that the payments should be classed as earnings and therefore subject to Income Tax and NIC, but Tottenham claimed the money was compensation for ending the contracts by mutual consent.

At the heart of the case was a relatively mundane technical point, because the payments were in effect for the footballers not doing their jobs, rather than for doing them, Tottenham argued that because of this they were not from employment.

The Tribunal agreed with Tottenham’s case, concluding that the payments did not derive ‘from the players’ employments and allowed their appeal.

Arrangements where footballers are paid to leave their club are relatively uncommon – they often receive a signing-on fee but not a ‘signing-off’ fee and I am not aware of any other ongoing cases of this nature.

HMRC has not commented on whether it will appeal the decision, and while it is somewhat unusual for them not to appeal when they have lost, as the point on which the case was won is relatively straightforward, the Revenue may decide to call full-time on it.

In terms of the future, this case has the distinct possibility of being used as a precedent in other arrangements. It is however worth remembering that the principle involved doesn’t just apply to footballers; it can potentially apply to everybody who is paid to leave employment.

The particular clause that caused the Revenue to argue the point here, a clause that said that the contract had to be terminated by mutual agreement, is common in footballers’ contracts, but not typically seen in employment contracts.

As the case revolved around footballers being paid by their clubs to depart, this reduces the scope for it having a broad application, which means that HMRC are unlikely to be caught out by this particular offside trap on a regular basis.

However, if companies up and down the land decide to insert a clause covering employees leaving an employer by mutual consent into standard contracts of employment, this could have significant effect on redundancy payments. 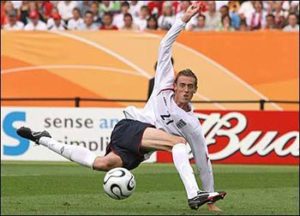 You can get all out of shape with the regulations

At present, the law says that a redundancy payment can be tax free up to a maximum of £30,000. However, if you receive any of the following:

There’s a high probability they won’t have had tax taken off and the bad news is, they will be subject to Income Tax (at your highest rate) and NIC, whatever your redundancy payment.

So if your employer will agree to inserting the required clause into your contact and agrees that should it arise, then redundancy will be by mutual consent with everything rolled up into one seamless contract termination payment, you will pay not one penny in tax, whatever the size of the cheque.