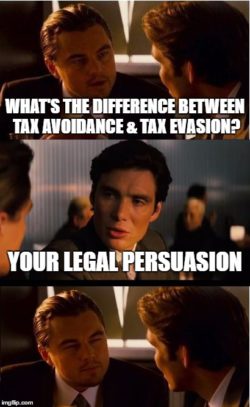 Serious tax evasion cases have jumped 8% this year as the tax authority faces pressure to crack down, which in actually represents an extra crop of 3,000 cases referred for major in-depth investigation.

HMRC is obviously keen to be seen to be ramping up its enforcement activity especially after the recent ‘Panama Papers‘ scandal, which comes on top of persistent criticism of its handling of tax evasion allegations at HSBC’s Swiss banking arm and other scandals in recent years.

Clearly headline-hitting exposés like the Panama Papers leak and the HSBC Swiss banking scandal highlight that sheltering wealth from the taxman, remains an extremely highly-charged issue and the new regime at HMRC, following Lin Homer’s departure, is obviously keen to impress their bosses at the Treasury as well as their most persistent critics, the Public Accounts Committee.

The crackdown is also exacerbated by an increased blurring of the lines between avoidance and evasion, especially in the eyes of the British public.

There are other worrying developments, particularly when the attitude of government and the general media seems to be that avoidance is equally as heinous as evasion, when it patently isn’t.

Questions of morality are also a real problem, with people now expected to work out the morality or otherwise of a scheme, which is putting increasing pressure on them to try and work out whether what they’re investing in is morally okay or morally dubious, whatever the legal position may be.

In my opinion, that’s no way to control and enforce the tax regime.

HMRC’s big anti-evasion push is being enabled by the recent addition of some potent weaponry to its arsenal.

“There are new rules like the corporate failure to prevent evasion. There’s also strict liability.”

“If you don’t disclose a foreign bank account the Revenue doesn’t have to prove that you intended to not disclose to find you guilty.”

The implication is that it will become much easier for the taxman to prosecute.

Also firms who have clients that have offshore affairs, such as companies that deal with Brits who have properties abroad, they will have to prove they’ve got the adequate controls and procedures in place. These are necessary to stop a member of staff from inadvertently facilitating clients’ affairs that could be viewed as some kind of evasion, in order to avoid criminal guilt themselves. In these circumstances, HMRC can impose fines equivalent to the amount of tax lost for those who aid evasion, on top of what they recover from the unlucky expat.

Another key development is the deployment of the common reporting standard in 2017. When the reporting starts under those regimes, the Revenue will have access to a huge amount of information on offshore accounts.

Any data captured will be filtered into HMRC’s state-of-the-art analytical system called Connect. This huge data mining computer can make connections in a matter of hours, compared to the past when it would’ve taken an individual months.

‘Fess-up to your Tax Mistakes

The best thing to do now, is to play it very safe, as with the Revenue’s increased capabilities, they will be able zoom in on many more taxpayers than in the past. My advice is to check on past transactions in the light of the new regime and if you discover you’ve got something wrong, especially anything you find dealt with incorrectly under tax law, it’s better to just come forward as it will save you money in the long run.