13 Unusual Excuses as to why an invoice wasn’t paid 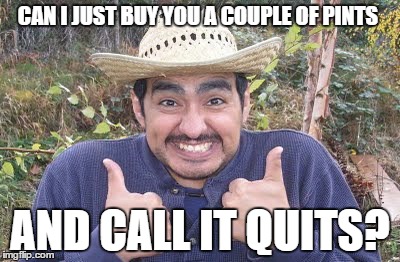 Regular readers of this Blog will know that every January I post a tranche of unusual and unsuccessful excuses used by taxpayers in penalty appeals, all taken from the now annual press release by HMRC.

Well, you lucky readers, this year you have a bonus Blog as those nice people at FreeAgent have published a wide ranging survey of inventive excuses why customers haven’t paid their invoices.

Small businesses in this country have to regularly deal with a flood of pathetic excuses from late or non-paying clients. FreeAgent, who provide cloud accounting software to small businesses and accountants, have undertaken a large survey of sole-traders and micro-business owners and published the results.

They discovered that sick pets, peculiar illnesses and bizarre morals all contributed to the excuses put forward by customers, as to why they hadn’t paid outstanding invoices.

Below is the list of the top 13 unusual or outrageous excuses for late or non-payment, most are from FreeAgents’ survey, plus a couple from my own experience of late paying clients. The list:

Other unusual excuses highlighted in the survey included one client who invented entirely new, fake contracts with additional non-payment clauses in them, and another who copied work that had been completed for them and then claimed that they had done it themselves. One client even claimed bankruptcy as an excuse for not paying when, in fact, they had actually sold all their assets and were in the process of moving to another country.

5 Most Common Excuses for Late Payment

The survey also published the top 5 most common excuses for late and non-payment, which included:

Ed Molyneux, CEO and co-founder of FreeAgent, said: “Late and non-payment is a huge issue for people who run their own businesses, and our research shows just how many awful and ridiculous excuses clients give for not settling their debts”.

“We found that many clients claim they didn’t receive an invoice or say that they don’t want to pay up because they didn’t end up using the work that they commissioned. And some even tell flat-out lies about their financial or personal circumstances, just to get out of paying what they owe – and that’s unacceptable”.

“Very few micro-business owners can afford to wait months, or even years, to get the money they’re owed, so it’s vital to chase up late-paying clients as soon as possible. Send frequent reminder emails, call clients regularly, review any relevant late payment legislation and check what kind of debt recovery or small claims options are available to you if your client still won’t pay. Otherwise you’ll just be putting your business’s cash flow – and potentially its future – at risk.”

Over 30 Years in business tells me

Just based on my own experiences over 30 years, I could produce a list several pages long of excuses clients have used over the years to delay, reduce or not pay at all. I think I’ve had just about every medical condition in the book, every conceivable family tragedy and an encyclopaedia of unforeseen disasters that have allegedly befallen clients.

In fairness to my clients, many of the excuses are genuine and in these cases I am sympathetic and realistic over payment. However, most are either an exaggeration or simply made up to avoid paying.

Employee Expenses Fraud
The coronavirus threat to business
Disguised Remuneration: Where do you stand now?