HMRC To Target Taxing of the “Sharing Economy” 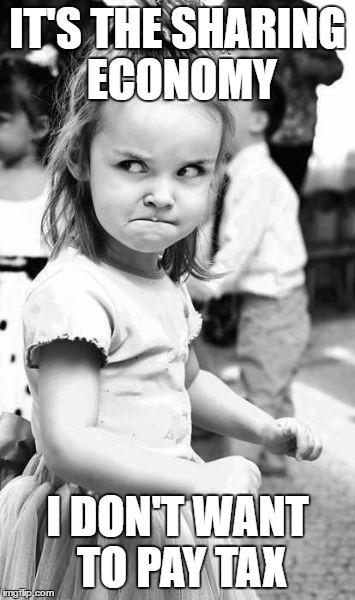 Many of us Brits have turned to ‘the sharing economy’ in their droves for extra cash; but HMRC will be gunning for this £15bn market from the start of the new tax year in April 2016, said the ACCA (the Association of Chartered Certified Accountants).

In a recent statement, the ACCA warned online traders to err on the side of caution and declare their income. According to Chas Roy-Chowdhury, ACCA’s head of taxation, HMRC will be turning the screw on online traders in 2016 – in particular property rentals. “Money made by renting out a property through Airbnb will be classed as income and must be declared to the taxman,” said Roy-Chowdhury. “If you are using the website to rent out a property you own then I would strongly advise to make the necessary declaration to HMRC.

A prominent example of a service operating in the share economy space is Airbnb, a website where people advertise private lodging. So, for example, someone might rent their spare room to tourists.

But with a tax gap to close, peer-to-peer collaboration in the share economy has attracted the gaze of HMRC. In a consultation paper titled ‘Tracking the Hidden Economy’, HMRC indicated it will force third parties, like Airbnb, to hand over data.

In 2013 (Finance Act 2013 section 228), HMRC was given new powers to collect data from businesses that process credit and debit card transactions. These powers will now be broadened to data held by electronic payment providers (not necessarily in relation to credit and debit cards), and business intermediaries which allow “customers to make orders, purchases or reservations, relating to goods, services or digital content”.

“This is because they can provide information in bulk about the activity of large numbers of traders, and because third party data can be used as an independent check against the data that taxpayers themselves report to HMRC.”

online data to track down small businesses that are under-declaring their sales. Apple, PayPal, Amazon, Ebay, Airbnb and online marketplaces like Etsy are likely to be the chief targets.

“Data about taxable activity plays a key role in enabling HMRC to detect those operating in the hidden economy,” wrote HMRC, “and to target resources to tackle them more efficiently”.

Online traders can expect visits from HMRC. On Any Answers, AccountingWEB user Glenzzy warned another member whose client was due a visit from the taxman: There “will be nothing routine about the visit”.

“They will turn up pre-armed with info that they think your client is guilty of,” he said. “You need a serious chat with your client to sound him out for what the issue could be.”

“HMRC are under tremendous pressure from the government to increase the tax revenues collected,” said Roy-Chowdhury. “If they believe that you are deliberately withholding information about a source of income they will look to penalise you.”

I have regularly warned readers of my Blog about the increasing ‘Big Brother’ invasive monitoring by HMRC and now they are finally admitting that all electronic activity, from banks to online transactions, is being scrutinised as a matter of routine. You have been warned!