Until YOU have to pay them 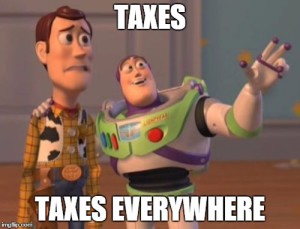 At the last election, David Cameron pledged that if the Conservatives won then Income Tax, VAT and National Insurance would not rise in the next Parliament.

On winning the election they met that promise by legislating for a tax lock which froze the rates of Income Tax, VAT and class 1 NIC for the extent of this Parliament, with Corporation tax rates are set to reduce to 18% by 2020.

If the main taxes can’t go up, this rather restricts George Osborne’s room for manoeuvre; so what does a politician do? Raise money in other ways of course, and hope no one notices those sly new taxes.

The Chancellor has therefore come up with a series of proposals to increase fees, levies, rates and supplements.

The Ministry of Justice came up with a plan to charge taxpayers fees if they challenge HMRC decisions at the tax tribunal. Currently the taxpayer pays no court fee to have their appeal heard.

The proposed fees will start at £50 to list a basic case, rising to £200 for complex cases. If the hearing goes ahead, the taxpayer will have to pay up to £1,000 plus further fees in order to appeal to the Upper Tier Tribunal. These costs will only be refunded to the taxpayer in very exceptional circumstances; for example, where the Tribunal deem HMRC’s behaviour to have been unreasonable.

The Ministry of Justice, were on a roll and came up with a plan to charge In order to activate a deceased person’s will, the executors of the estate need to apply for probate and pay a registration fee of £215. This fee currently applies where value of the estate is £5,000 or more. However The Ministry of Justice wants to increase the threshold to £50,000, but also raise the minimum fee to £300. This may relieve 57% of estates from paying any probate fee at all, but larger estates will pay fees on a sliding scale of up to £20,000 for an estate valued at £2m or more.

The Government wants employers to fund more apprenticeships. The logical way to do this would be to increase employer’s class 1 NIC. However, the tax lock has blocked any increase in class 1 NIC.

Instead the required funds will be raised via an Apprenticeship Levy. This will apply from 6th April 2017 at the rate of 0.5% of employees’ wages, calculated in exactly the same way as employer’s class 1 NIC. The apprenticeship levy will be reported in a new box on the RTI returns and every employer will have a £15,000 allowance to set against the levy. The net effect is that only the largest employers will pay the apprenticeship levy, but every employer will have to calculate the levy and claim the allowance.

This new tax is set to raise a whopping £3billion and the cynical part of me suspects that only a fraction of this money will actually be used on apprenticeships.

The self-employed will not pay the apprenticeship levy, but they are likely to pay increased rates of NIC from 6th April 2017, the proposed date when Class 2 & Class 4 NIC’s are merged. George has sneakily got round the tax lock on NIC by stating that the likely change is a merger of the two and counts as a tax simplification and not a tax rise. Well if you believe that, you probably also believe in alien abductions!

Stamp Duty Land Tax (SDLT) was not included within the tax lock, so the Government is free to raise the rates or reduce the thresholds. The existing SDLT is to have a supplement tacked on which achieves both of those things, by imposing a 3% charge on the entire purchase price of a second home, or on any residential property acquired by a company from 1 April 2016.

Second homes in Scotland will be subject to a similar hike, with the Land and Buildings Transaction Tax (LBTT) also to have a supplement at 3% on the entire purchase price from 1 April 2016. The exemptions from the LBTT supplement mimic those for the SDLT supplement. For instance, neither supplement will apply to properties worth less than £40,000, if you can find one at this price of course.

Income Tax rates were frozen by the tax lock, so the Chancellor can’t increase Income Tax on dividends. His solution was to invent a new tax: the Dividend Tax, which operates exactly like income tax, but only applies to dividends in excess of £5,000 per year.

Thus the UK tax yield is likely to rise substantially by this combination of new taxes, changes in thresholds, increases in rates of existing taxes and a rise in compulsory fees.