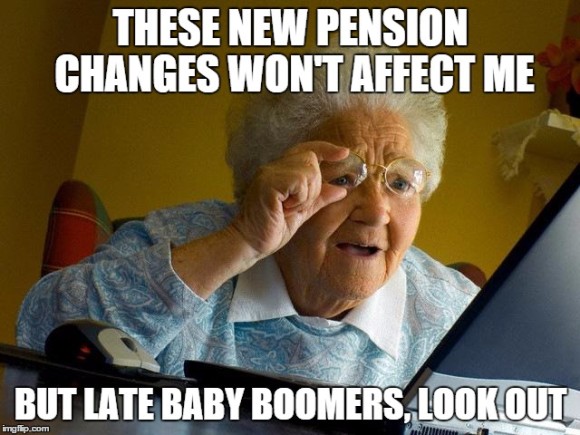 The current State Pension system is complicated. This makes it hard to work out how much State Pension you’re likely to get and in turn difficult to plan ahead for your retirement. But there are some complicated changeover arrangements which you need to know about if you’ve already made contributions under the current system.

Below is a list a of frequently asked question I recieve which may be of asssistance, please scroll click the question and our website will take you to the answer.

I’m already getting a State Pension

Key changes to the State Pension

The earnings-related part of the current system for people, who are employed, called the Additional State Pension, is being abolished with the new State Pension being based on your National Insurance (NI) record alone. To receive the maximum new State Pension, you require 35 years NI record. From April 2016 the new State Pension will be £155.65 per week.
However, if you have been ‘contracted out’ of the state scheme at any time in your working life the amount you receive under the new state pension may be reduced. Calculating this is complicated, but you can find out more at: www.gov.uk/new-state-pension/youve-been-in-a-workplace-personal-or-stakeholder-pension

How will the new State Pension be calculated?

Your NI record as at 6 April 2016 will be converted into a starting amount under the new State Pension. This won’t be lower than the amount you would have under the current system.

You will get the full new State Pension amount and you’ll also keep any amount above this as a protected payment which will increase by inflation, but you won’t be able to build up any more State Pension.

Other new rules which may affect you

Getting a State Pension statement

It’s a good idea to regularly request a State Pension statement so you can see how much State Pension you’ve built up so far and you can apply for one online at: https://www.gov.uk/check-state-pension

Topping up your State Pension

If you’re unsure whether topping up your State Pension is worth doing, you can talk to the pension advisory service, who are usually very helpful. Go to: http://www.pensionsadvisoryservice.org.uk/

My thanks to the Money Advice Service in compiling this Blog