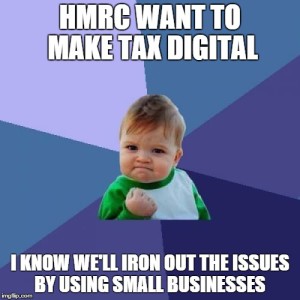 The move towards quarterly reporting has started, but there will be many known and unknown issues to be resolved along the way. A major unknown is whether quarterly tax payments will follow on from quarterly reporting. This matter has not been decided either way by government ministers, or so we were told by HMRC.

A further more formal consultation on Making Tax Digital will follow from April 2016 onwards, which will consist of series of events held around the country. HMRC wants to reach out to smaller businesses and their advisers in those events.

Who will report to HMRC?

All businesses will be required to report at least quarterly to HMRC, this is most definitely not up for negotiation. Individuals with secondary sources of income (non-PAYE) of £10,000 or more will also be within scope of quarterly reporting. When questioned on how this £10,000 was arrived at, the answer appeared to be “taxable income”. So a landlord with rental income of £1,000 per month gross, and interest payments of £500, will be brought into quarterly reporting as the interest will not be tax deductible, as the their taxable secondary income will be £12,000 per year from 2020.

When will Quarterly Tax Returns start?

The timetable for bringing taxpayers into quarterly reporting is expected to be:

This approach; starting with the smallest and least sophisticated businesses, was challenged by the accountants present as being the wrong way round. HMRC was urged to start quarterly reporting for businesses which have the greatest capability to cope i.e. large companies with in-house tax departments.

What type of financial information will be reported?

What type of data will be reported quarterly: A summary of receipts and payments or the detail of every single business transaction? – HMRC doesn’t know; as no decision has been made. This response calls into question how HMRC can be negotiating with software providers if this fundamental point has not been decided.

HMRC believes that businesses won’t have to hire tax professional to do quarterly updates. This implies that all business data items will be submitted (every invoice issued and receipt for expenses), with no analysis of whether the items submitted are tax deductible or not. The HMRC mantra is: “reporting to HMRC closer to real time will reduce errors”. HMRC’s reasoning as to exactly how more frequent reporting will reduce errors was not explained.

Every business will have access to an HMRC digital tax account from April 2016. Accountants will be able to manage their clients’ digital accounts, with the work to provide access to those accounts is being synchronised with Agent Online Self-Serve (AOSS).

At present AOSS is being piloted with accountants who have no more than 200 clients, which pretty well excludes over 95% of my profession. HMRC could not say when AOSS will be available to all accountants as currently that programme appears to be running behind its predicted schedule.

HMRC is consulting with commercial software providers to provide free software for smaller businesses and for those with less complex tax affairs. There is no definition of “smaller” or “less complex” in this context as yet.

The HMRC vision is that the software will flag-up data items which are potentially wrong and HMRC will send a personalised message to taxpayer as guidance.

One accountant asked: What research has HMRC had done as to the types of software already used to record business transactions? It was emphasised that many businesses used spreadsheets, or bespoke software, as there is no commercial software available for their particular form of business, e.g. independent financial advisers.

When asked the question, will penalties be imposed for late quarterly reporting or for inaccurate reports, or both? HMRC apparently didn’t know the answer to this, other than; “there will be a light touch approach.” 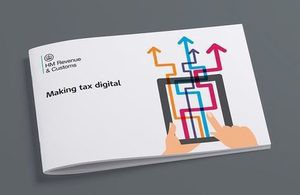 Apparently no decision has yet been made on businesses that currently prepare annual VAT Returns or the many thousands of small businesses that use the flat rate scheme. When asked directly if these two schemes for smaller businesses are to be abolished, and if so when, HMRC stated that this was currently being reviewed.

HMRC promised that tax repayments would be obtained quicker under the quarterly reporting system, which implies that off-sets of tax owing and tax deducted such as CIS tax would be made. As CIS repayments are currently delayed for months due to security issues, HMRC had no answer on how those issues are going to be over-come.

To sum up making tax digital

HMRC acknowledged that Making Tax Digital will be as fundamental an alteration to tax administration as the 1997 change to self-assessment. For those of us who worked through the move to SA, which also involved a change from the prior year basis to current year basis for the self-employed, the move to digital tax accounts and quarterly reporting appears to be indecently rushed.

If any of you have a comment or question about the Making Tax Digital programme you are invited to send them to HMRC at this address: [email protected]

In the unlikely event of you getting a reply, I would be grateful if you would forward it to me and with your permission, I will be pleased to share it with the wider public

Making Tax Digital - What its going to cost you!
Finance Bill 2016
HMRC con Businesses out of Employment Allowance