The government recently launched ‘Making tax digital’, which outlines its long-term plans to digitise the UK tax system. However, most tax professionals consider that its ambitions could well be too much for small businesses to cope with. 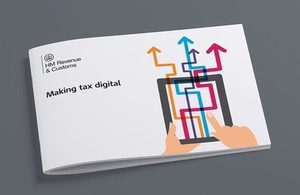 Since the Chancellor’s announcement in March heralding the demise of the annual tax return, HMRC has received a £1.3bn boost to make his digital dream a reality. “This government is bringing the digital revolution to Whitehall ensuring that the services it provides are similarly transformed. The tax system is no exception,” wrote Treasury secretary David Gauke in the introduction to the latest policy paper.

My immediate thought was; on what basis is it better for businesses to have to produce accounts and calculate tax four times a year instead of once? This proposed system will also cause major issues for seasonal businesses, not to mention the additional costs of preparing Annual Accounts on a different basis for limited companies.

And I’m not the only person asking the same question. “If you have to update quarterly what will the deadline be? We’re almost going to give the information in real time. It will be impossible to run business because you will always be reporting to HMRC. Businesses won’t be able to cope. There’s essentially going to be four self-assessment deadlines, which will be horrific, especially if we lay the existing penalty regime on top of it.” said Rebecca Benneyworth of AccountingWeb.

Accountant and tax campaigner Richard Murphy also bristled at HMRC’s obvious misunderstanding of the time and processes involved in accounting. “What HMRC seems to think is that accounting is just an exercise in totting up the books. It’s assembling the data to populate the return that takes all the time. HMRC’s claims utterly ignore that fact and want to increase the time-consuming part of the job fourfold. That they do not seemingly understand this is deeply troubling.” Murphy wrote.

On behalf of the software trade body BASDA, members of which produce the tax software that accountants and businesses use, their chairman Kevin Hart commented: “Yesterday’s document both consolidates numerous separate pieces of information that have entered the public domain and confirmed speculation in the industry with regard to timeframe. It is, however, rather light on detail, such as how the many complexities of tax are to be addressed.”

Hart added that one of BASDA’s primary aims will be to attempt to balance HMRC’s aspirations with the regulatory burden it imposes on the tax/accounting software industry and its customers, which in his opinion will be significant.

The plans are not all negative though, as it will mean that businesses will have to give their Accountants records once a quarter rather than the annual nightmare every December & January and eliminate the need to chase up disorganised people to bring in their records.

And yes, I accept that we need to ensure that taxpayers’ tax bills are right and using this new digital accounts system will make it much easier, quicker and simpler to tell HMRC about information that is not reported through other means.

However, it is yet another tax reporting burden being heaped on the shoulders of small businesses, which are already buckling under the present system, especially with the RTI requirement for monthly reports, not to mention pension auto-enrolment which is about to be rolled out to all firms, however small.

I suspect that the real reason for bringing in digital accounts, which requires quarterly tax returns, is quite simply to even up the flow of tax into the treasury and to get it in quicker.

HMRC are finally taking on the tech giants
Bank of Mum & Dad comes a cropper!
Splitting your business to avoid VAT registration