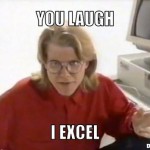 Last year saw a surge in the lighter side of accountancy, with new contenders emerging to claim the uncharted territory where comedy and accountancy collide.

But rather than being the butt of the joke, tax expert Pete Miller attempted to dispel this stereotype by participating in a sponsored stand-up challenge raising money for the Big Difference charity and raised £15k.

Miller is a natural storyteller. Miller’s bombastic, quick-fire delivery only stops long enough to draw breath and give the audience a chance to chuckle, but delivering a stand-up routine is a different beast than conducting a tax seminar. “When you are giving a three hour seminar, you can drop in the odd joke and if no one gets it or finds it funny you just carry straight on because you got loads of material and you are not there to be funny. The real challenge is for that five minutes I am there to make people laugh,” Miller said.

Miller does the odd motivational talk about discovering your inner superpower, “If you want a superpower and you’re an accountant, you always have one,” he tells audiences. “The power of invisibility… Nobody sees you.”

Miller leans on his tax background as a source of mirth. “When I was an inspector many years ago with the Inland Revenue I had this wonderful letter. ‘Dear Mr. Miller, please stop asking me for tax. I live in Brighton. You work for the INLAND revenue’.”

Miller’s anecdotes reflect the way many finance professionals embrace gallows humour to get through the day. He recalled a long correspondence he had with a firm of accountants which culminated in what Miller calls the perfect letter for a tax inspector: ‘Dear Mr. Miller, we give up. Yours sincerely…”

But Miller won’t be the first accountant to stand-up from behind the desk: Bob Newhart, Arnold Brown and Eddie Izzard all pursued a career in the profession. Miller theorises that accountants can make the transition to comedian with ease because comedy is an intellectual exercise.

The Joy of Tax

Comedian Tom Goodliffe was an accountant before swapping the spreadsheets for the stand-up spotlight. While Goodliffe says comedy is a little more fun than accountancy (he’s quick to counter “But I do love a good spreadsheet!”), it’s not nearly as lucrative, unless you’re on TV. 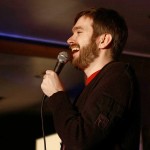 Goodliffe is somewhat reticent about leaning too heavily on his accountancy experience on stage, saying: “I think some of the finer points might lose the “well-lubricated weekend crowds”. But Goodliffe often does use it as a jumping off point for his shows. “I have a political routine where I play David Cameron and mention the academic Richard Murphy, he’s the Labour Party’s new economics guru… His book is actually called ‘The Joy of Tax’. I’ve read it. I took it home to show Samantha. It’s got 64 positions. And none of them work.”

While the audience may not be privy with the minutiae of tax, many will be aware of stand-up jimmy Carr’s entanglement with the K2 Jersey-based tax avoidance scheme. Miller is naturally toying with the idea of using his tax inspector history to mention the comedian. “Does telling anything about Jimmy Carr end up being a bit of a cliché, but then of course, it doesn’t stop a cliché from being funny,” Miller muses.

The accountancy forum AccountingWEB gives accountants plenty of ammunition to indulge the blacker side of their sense of humour. For example David Gordon responded to HMRC’s ridiculous claim that June’s government gateway malfunction was only for a few hours: “Of course it was only a few hours. Any of you who are also science fact and fiction fans know that the closer you get to a black hole the slower time runs.”

But what are we to make of this year’s comedy boom? Does the trend indicate that things are turning up and accountants are feeling relaxed enough to let off a little steam or are these people giving up on accountancy because they see comedy as a more rewarding and stable career option?