The rise and fall of HMRC’s Business Records Check

In 2011, at the HMRC version of Area 51 (Officially known as HMRC’s policy and planning group), a think-tank of senior tax inspectors were discussing likely targets for their next campaign against small businesses, when someone came up with the inspirational thought that perhaps small businesses were paying the wrong amount of tax because they weren’t accurately recording their sales and expenses.

The tax inspectors got very excited and speculated that if only they could examine those records before the accountants got their hands on them – the problem could be cured at the source! What’s more there was a handy little provision (TMA 1970, s 12B) which could be used to apply penalties of up to £3,000 for “inadequate” business records. Thus the Business Records Checks (BRC) campaign was born.

BRC started as a pilot between April and July 2011, when HMRC officers visited around 800 small businesses to examine their business records for the current accounting period. No penalties were imposed at that stage, but if the records were found to be inadequate on a follow-up visit, a penalty was possible.

The BRC program was rolled out nationally from September 2011, with the expectation that 20,000 visits would be undertaken each tax year. All professional bodies, including the Chartered Institute of Taxation (CIOT), were distinctly unhappy that HMRC considered itself both judge and jury when deciding whether business records were inadequate before any attempt had been made by the business or its accountant, to compile the Accounts. HMRC appeared to believe that incomplete records – eg a shoebox full of receipts – equated to inadequate records. The professional bodies also disagreed with HMRC about the legal basis for charging a penalty for inadequate records.

At the end of December 2011, HMRC started a review of the BRC campaign as only 12% of businesses had been found to have inadequate records compared with the estimate of 60% plus, they’d predicted before the start of BRC. Accountants complained that BRC visits were a complete waste of time as not a single penalty had been imposed for inadequate records.

Not wishing to admit they’d made a mistake; in late 2012 HMRC revived the BRC campaign as a telephone interview triage approach. This consisted of about a dozen questions, two of which concerned cash receipts and payments. If the answers were considered acceptable no further action was taken, in other cases a BRC visit was arranged, with no penalties to be charged until a second BRC visit was undertaken to the same business. 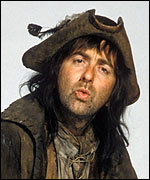 Even Baldrick knew that BRC was not a cunning plan!

Over the next 12 months almost 30,000 businesses had been contacted under the BRC programme and, surprise, surprise, not one penalty had been imposed for inadequate records. So back to the think-tank for a second review of BRC and those shabby suited jobsworths decided to draw up a series of benchmarks of what good record keeping should look like. Once again those ivory tower bozos came up with a check-list that so that they’d have a better stick to beat small business owners over the head with. It will not surprise you to hear that even a lowly junior accounts clerk, could see that HMRC’s theoretical perfect set of records bore no resemblance to a real life business situation.

Finally, after pressure from the CIOT and the various accounting bodies, those sensible people at the Office for Tax Simplification (OTS) got involved and published a short report on their findings.

Small businesses in this research were largely confident in their record keeping, were attitudinally compliant and not reporting need of any support. This confidence has been reinforced by the lack of issues with record keeping or tax returns (raised either by HMRC or accountants) that customers have experienced to date. This was especially so for businesses that had been in operation for a long time, and those represented by an accountant. Where customers had looked for information and advice, they tended to turn to trusted friends and family, peers, accountants and, to a lesser extent, HMRC.

In other words, the OTS were essentially saying that overall small businesses are law-abiding, when it comes to paying their taxes and the accuracy of their tax returns does not suggest poor or inadequate record keeping.

With this now hot potato back in their lap, HMRC after a period of hand-wringing, contacted the CIOT and accounting bodies to say that the BRC was to be wound-down from 20th October 2015; which was greeted by the CIOT as ‘victory for common sense’.

So, now that this dog’s breakfast of an idea has been abandoned, will HMRC learn their lesson?

History tells me that the group of Turnip-heads in HMRC’s policy and planning group will almost certainly come up with yet another ‘cunning plan’, which from past experience will have as much chance of being successful as Baldrick’s inspired, but ill-thought out and impractical suggestions to Edmund Blackadder and similarly doomed to failure!