The Chancellor has pledged to end the squeeze on public spending a year earlier than planned and deliver a ‘truly national recovery’.

“This is a Budget that takes Britain one more big step on the road from austerity to prosperity,” George Osborne said in his Budget 2015 speech. 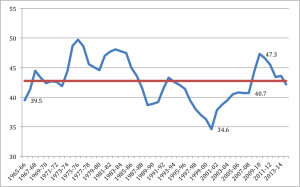 British Government Spending as a Percentage of UK GDP

Rather than a planned surplus of £23bn in 2019-20 the government is planning a surplus of just £7.1bn with most of the additional money going on additional public spending.

Peter Spencer, chief economic adviser to the EY ITEM Club, said the Chancellor did deliver a pre-election forecast after all, but for 2020 not 2015. “The big change relative to December is that austerity comes to an end a year earlier, in 2018-19. Spending is reduced by £9.7bn in 2018-19 compared to the December OBR forecast. This is largely due to the effect of lower inflation and interest rates on debt interest”.

He continued: “But then in 2019-20 it shoots £13.1bn above the previous forecast, just in time for the 2020 election. This will come straight through departmental spending outside the ring fence, allowing the Chancellor to side-step the OBR’s cutting remark at the time of the Autumn Statement that this would fall back to the level of the 1930s.” Spencer said.

To help pay down some the national debt Osborne revealed that the government would sell a further £9bn of Lloyds shares along with £13bn of mortgage assets from Northern Rock and Bradford and Bingley.

The inflation forecast was revised down this year to 0.2%, but Osborne said he would take the opportunity to lock in low interest rates for the long-term and increase the number of long-dated gilts that are sold.

The Chancellor also revealed that the unemployment forecast was set to fall this year from 5.4% down to 4.9%, but this is based on a number of scenarios all keeping positive. The OBR have hedged their bets by stating that they it expect it to fall by a minimum of 0.1 percentage points and possibly further.

In the run up to the Budget new data was released revealing the employment rate had hit a record high of 73.3%, although earnings growth had slowed. The Office for National Statistics (ONS) reported that employment continued to rise and unemployment continued to fall in the three months to January. The jobless total is now 1.86 million – the lowest since the summer of 2008 – and almost half a million down on a year ago.

Martin Beck, senior economic adviser to the EY ITEM Club, added: “The start of 2015 heralded the start of a slowdown in the trend of declining unemployment, with the Labour Force Survey rate for the three months to January remaining unchanged at 5.7%.Yet, the number of people out of work has dropped to the lowest level since August 2008, and the claimant count measure of unemployment continued its precipitate decline.”

In addition to other familiar pre-election crowd pleasers, Chancellor Osborne pledged to revolutionise the UK’s internet infrastructure in his Budget 2015 speech.

Most notable was the expansion of the broadband connection voucher scheme. This will provide grants of up to £3000 to SMEs looking to upgrade their broadband connections. According to the government, over 12,600 businesses have taken up vouchers so far. By 1 April 2015, the vouchers will be available in 28 additional cities across the UK, taking the total to 50 cities.

The voucher scheme is at the forefront of the master plan to connect nearly all premises in the UK to broadband of “at least 100Mbps”. Reacting to the Broadband promises, Jon Wilcox, adviser to AccountingWEB, noted: “A full broadband roll out is already on the cards at the not-so-blistering speed of 2Mbps.”

To speed up the process, he suggested scrapping the planned High Speed 2 (HS2) railway and spending that money on delivering 100% FTTC (Fibre to the cabinet) and FTTP (Fibre-to-the-Premises) where possible, which he said would benefit the UK’s heartland far more.

The Internet of Things and the UK Economy

What exactly is the Internet of things?

Osborne also said he would promote the “internet of things” (IoT). That is, the network of physical objects or “things” embedded with electronics, software, sensors and connectivity to enable it to achieve greater value and service by exchanging data with the manufacturer, operator and/or other connected devices. Each thing is uniquely identifiable through its embedded computing system but is able to interoperate within the existing internet infrastructure.

Typically, IoT is expected to offer advanced connectivity of devices, systems, and services that goes beyond machine to machine communications (M2M) and covers a variety of protocols, domains, and applications. The interconnection of these embedded devices (including smart objects), is expected to usher in automation in nearly all fields, while also enabling advanced applications like a Smart Grid.

Mark Brown, executive director of cyber security and resilience at EY, welcomed Osbourne’s direct reference to the IoT – but warned that it brings both benefits and risks. “The interconnectivity of people, devices and organisations in today’s digital world opens up many exiting new opportunities and the ability to create efficiencies across key areas such as health and social care. However, this will create greater vulnerabilities and existing security defences will come under increasing pressure, requiring a rethink in how organisations approach cyber security.”

If any of you would like more detailed information on any aspect of The British Economy, send me an e-mail and I’ll be pleased to advise further.